When trading and haggling I am completely untalented. However, I’ve managed to make the best flea market bargain ever. 50 belts for 1 Euro, and actually they would have cost only half. 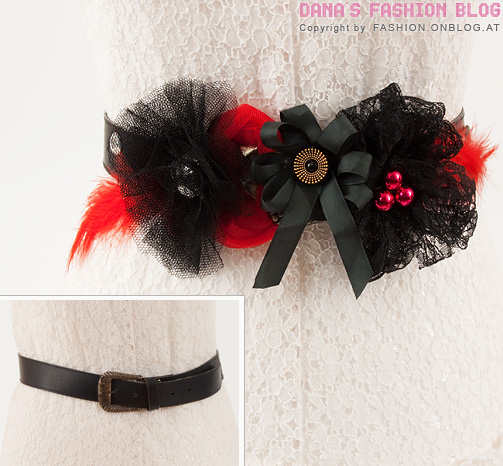 I discovered the belts relatively late at a woman who already was packing up her market stand. She was obviously in a hurry but realized immediately that with me it will take a longer time to sell me something. Therefore, she made me spontaneously an “immoral” offer: All 50 belts for 50 cents! I was so stunned and happy and “generously” paid her one whole Euro. As I said already, in bargaining I’m zero;)

Under my prey are 10 identical black belts, which are ideal for “spicing up”. Today I show you a version with studs, rhinestones, and large flowers of tulle, lace, and satin. For those who like something simple, take only one color and do not make quite as large flowers as I did in this DIY tutorial. 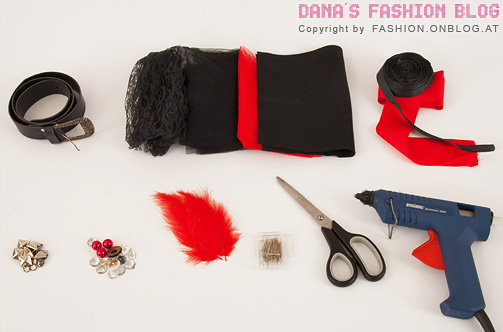 Before you start, plug in your hot glue gun and protect your work area with newspaper or something similar. 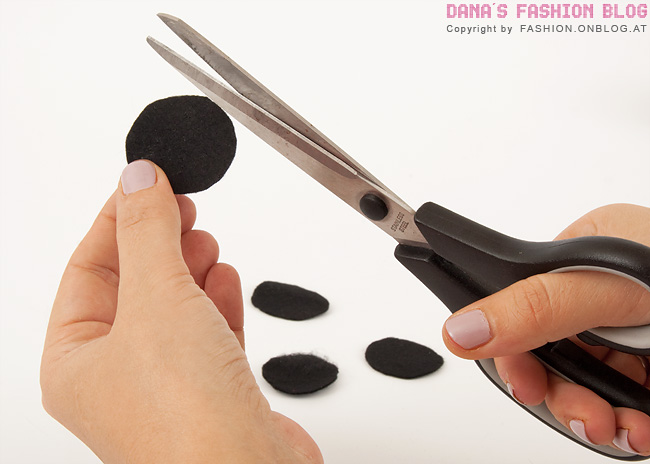 Cut several small circles of felt, which you will need as a base for the fabric flowers. 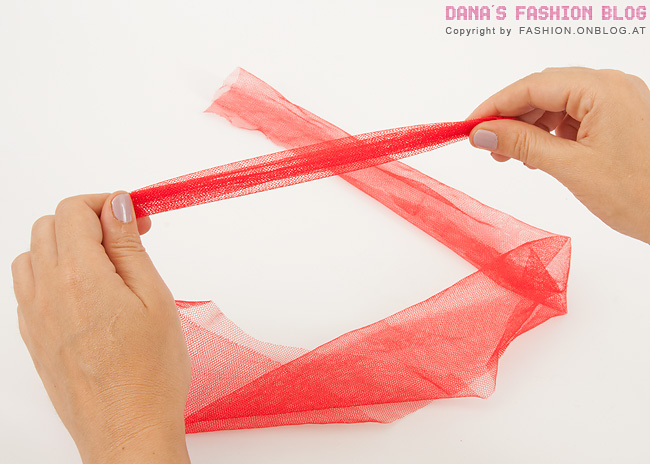 Cut the tulle (or any other lightweight material) in strips and pull them a little into the length so the strips will slightly turn in.

Put a little glue on a felt-circle and turn in the stripes of tulle from the center outwards to get a rose-blossom (see picture). 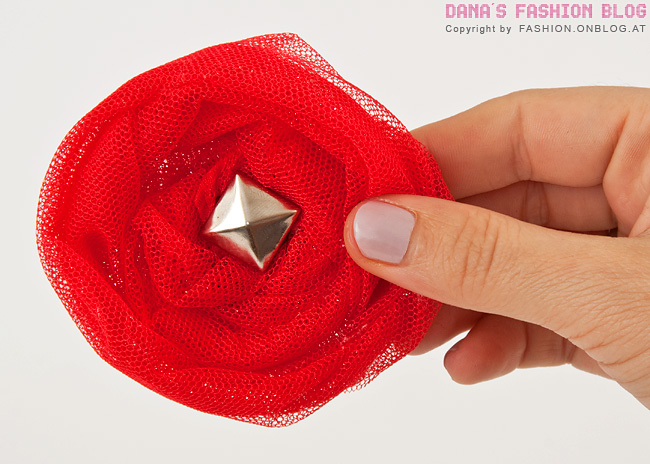 Decorate the finished flower with a rivet, a rhinestone, or a button. 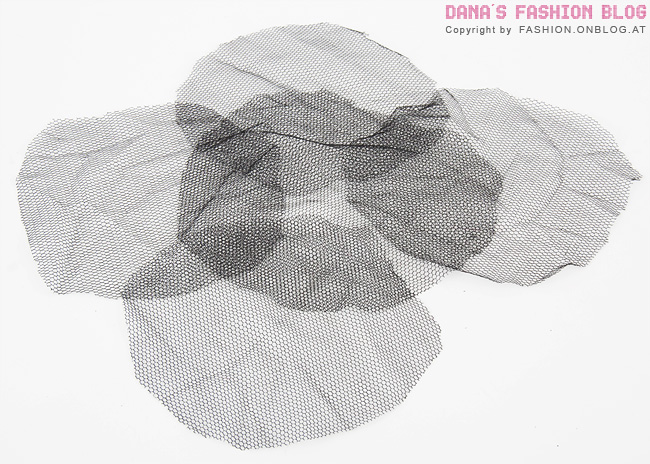 Now cut some circles from the tulle. How large the circles should depend on the desired size of the flower. My circles are about the size of a CD. 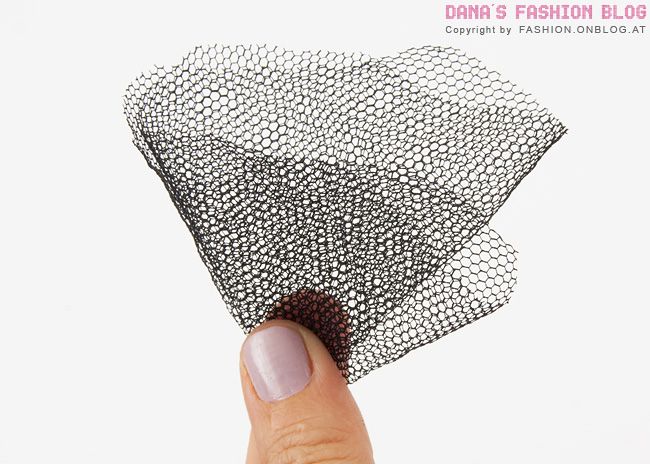 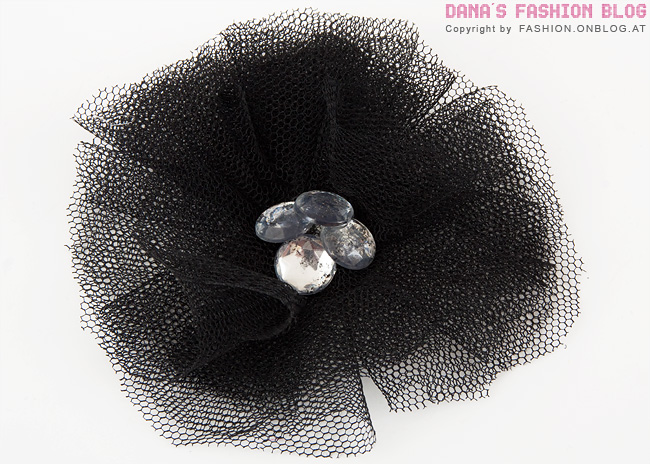 Again decorate it with rhinestones or something similar.

Here’s the next flower. I glued the lace to the felt and with small bows I created a flower, which I decorated with glittering beads. 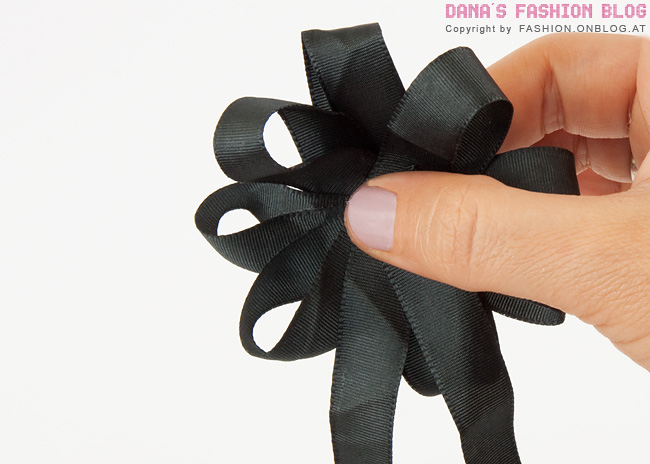 If you like, you can also take tapes to make small flowers. Simply form small bows and then fix it with pins stuck in the middle. As decoration, I’ve taken a pretty button.

Finally attach the carved flowers around the buckle, glue the feathers between the flowers and maybe decorate it with a few individual studs and stones. DONE! 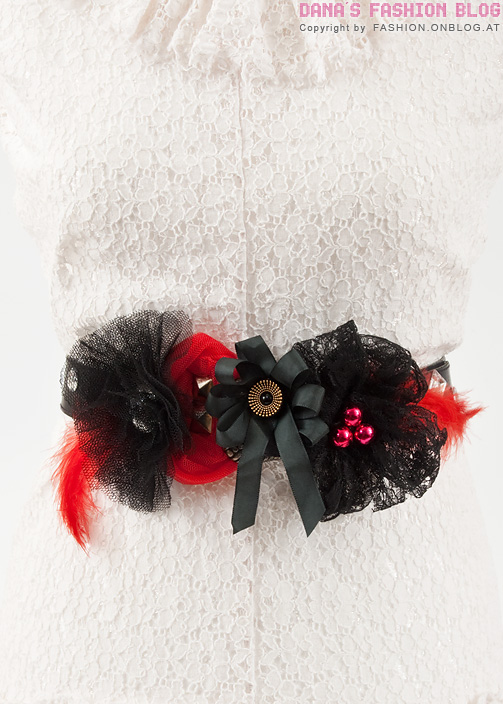 At best you wear the belt at waist level because as an eye-catching it directs attention to the smallest part of the body and distracts from other possible problem buts. I prefer to pair the belt with oversized tops or shirts. 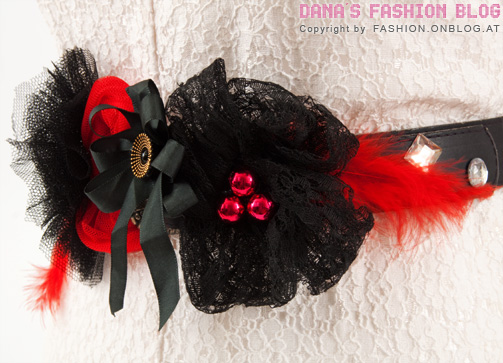